I was at Clarkson University in the beginning of my sophomore year when I saw signs for the College Program posted around the school. The informational program and the interviews were held at SUNY Potsdam – another college across town. I decided to go to the information session and applied and interviewed, not necessarily planning on getting in but really excited at the possibility (winter in Potsdam NY is worse than winter in Maine!).

I waited excitedly for the possibility of getting in and low and behold! I did!! I had applied for the Spring Advantage program (January – August).  I received my job offer via mail and was offered a position called Role Hopper Castmember.  After I received the letter I had two weeks to decide if I was going to accept.  I obviously did!! 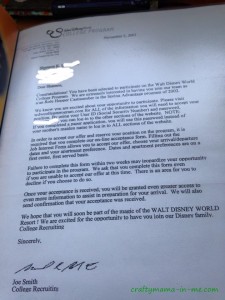 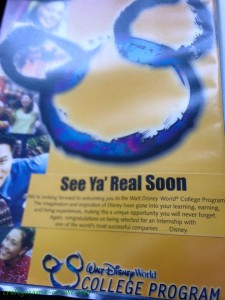 You were told that you didn’t need to have a car while on the program as they provide buses but I decided I wanted to have my car.  My parents wouldn’t let me drive from Maine to Florida by myself so my grandmother went with me.  On January 13th, 2002 we embarked on our adventure.  It was a good thing my grandmother was with me as my car broke down in Joppa, Maryland.  If she hadn’t been with me I probably would have lost it all by myself trying to figure out what to do.  We ended up getting the car to a mechanic (the transmission had gone on the highway), taking a taxi to the Baltimore airport and renting a car for the rest of the drive.  My dad flew down to Baltimore after my car was fixed and drove it the rest of the way to Florida for me (my parents really are amazing!!) and then flew home to Maine.

Once we finally made it to Orlando on January 15th we stayed the night at the Comfort Inn.  I checked into Vista Way on January 16th.  Once Mimi helped me got unloaded in my apartment it was time for her to head out to the airport to return to Maine.  The first day we checked in, moved into our apartments, met our roommates and were given more information about our schedule.  We had Traditions to get through as a large group before we were split into smaller groups for additional job specific training.  We also had a park specific training – mine was at Epcot. 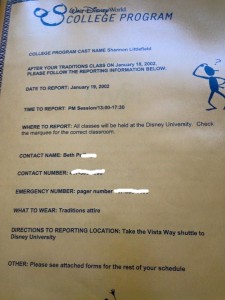 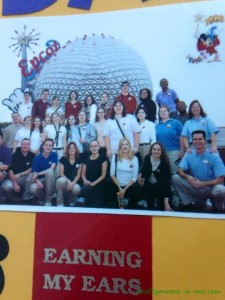 During the training I was under the impression I was going to be a Food and Beverage hopper – meaning I would work at various spots in F&B roles. When we were given our final assignments myself and another girl (Heather) were pulled from that group and told we were going to work at Epcot Events.  We were the only two college program kids at this location, our position was labeled Epcot Event Warehouse Coordinator.  I remember worrying that I wouldn’t like it – but turns out it was awesome!!! 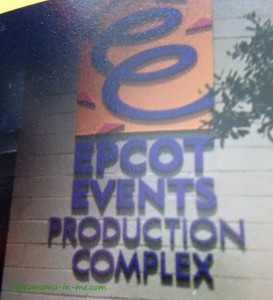 Epcot Events was my home for my College Program.  Heather and I worked closely with the Catering Managers and the Houseman and Servers to help prepare for all of the Events that took place at Epcot, Disney Wide World of Sports, the water parks and golf courses.  It was such an awesome learning experience.  We helped the managers by filing the BEO’s (Banquet Event Order’s), we helped pull the equipment needed for the events and helped setup at times.  We had a lot of flexibility and freedom in our position that I’m sure most don’t.  I went to more backstage places, VIP Lounges, etc. that I bet half of the Disney cast don’t even know exist.

I had a blast at work and also enjoyed going and playing in the parks. 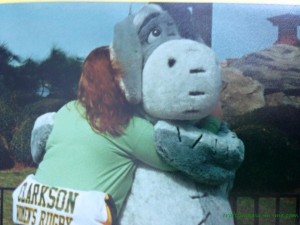 I went to see the Red Sox during a spring training game in Fort Myers, I went on a road trip to Key West, made multiple trips to Daytona beach, and just enjoyed the Central Florida area.  If you are considering the college program make sure you take advantage of everything that is around you.  I wish that I had gone on a Disney Cruise before I left!

This is an opportunity of a lifetime.  If you love Disney – I would recommend it – yes it will put you a semester behind but a lot of colleges require internships now so you may even get credit for it (I did get credit for it at Johnson & Wales but wouldn’t have from Clarkson).  I ended up graduating in 2005 instead of 2004 – I consider that pretty good considering I took a semester off and transferred schools! 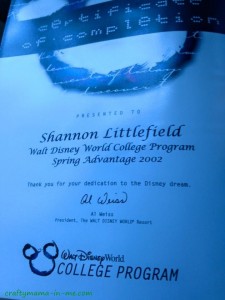 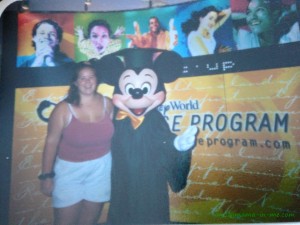 I met people that I still keep in touch with to this day (don’t you love Facebook??).  I am currently 13 years out of my program and still think fondly of it – you definitely make memories and friends that will last a lifetime.  One of my roommates is coming to Maine to visit this Spring – the first time we will see each other in person since we left Florida in August 2002.

I am now part of the Disney Alumni Association – we have a facebook group and they plan various events that are Alumni exclusive.  I hope in the future I will get to take part in some of those events!  I am going to try to coordinate a 15 year reunion at some point during 2017 so I can meet up with old roommates and friends at Disney World and visit with our spouses, significant others, and children!