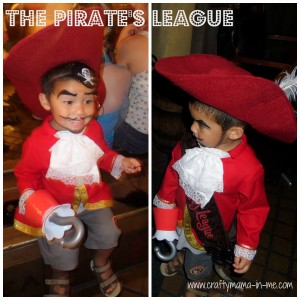 The Pirate’s League at Magic Kingdom

I was so excited when we booked our vacation in September to realize that I was going to experience Mickey’s Not So Scary Halloween Party (MNSSHP) for the first time!  Since we have a little girl who loves Princesses I knew that we would be visiting the Bibbidi Bobbidi Boutique for her to get a makeover.  I wanted something for my son as well so he wouldn’t be left out.  I didn’t really think being a Knight was something that he would be super excited about so I did some more research and stumbled upon The Pirate’s League!

The Pirate’s League couldn’t be more perfect for him as he had already decided to be Captain Hook for Halloween.  I mean they even have a Captain Hook facial effects package – what could be better??  This is also a very reasonably priced (for Disney) option – the packages range in price from $29.95 – $79.95 depending on what you choose.  For Buddy we picked the First Mate Package (which included his Captain Hook facial effect) which was only $34.95.

Around MNSSHP dates both Bibbidi Bobbidi Boutique and the Pirate’s League book up very quickly as people like to go before the party and get made up.  I made both the kids reservations roughly 6 months out (this was taken care of in one very easy phone call) and didn’t have many options for times.  I made the reservations prior to buying our tickets to MNSSHP as the “official” dates hadn’t been released.  The cast member I spoke to on the phone advised me that it was likely a party date as the park was scheduled to close at 7pm.

A handy piece of advice that you will find if you research MNSSHP is that you can get into the parks at 4pm with your MNSSHP ticket so you could save an admission from your multi-day pass if you only plan on attending the party.  We would have done this had it not been for our Pirate’s League reservation – the latest they had on our chosen date was 3:30pm.  To make the most of this we went into Magic Kingdom when the park opened on our party date and stayed until around noon, went home when the rain started for naps and came back prior to our reservation time.

When we re-entered the park we headed straight for the Pirate’s League for our reservation time.  We were a few minutes early, after checking in we were told to take a seat and wait for someone to come out for Buddy.  The wait was lengthy (no where near as long as Bibbidi Bobbidi Boutique) – probably around 30 minutes past our appointment time outside and more inside. 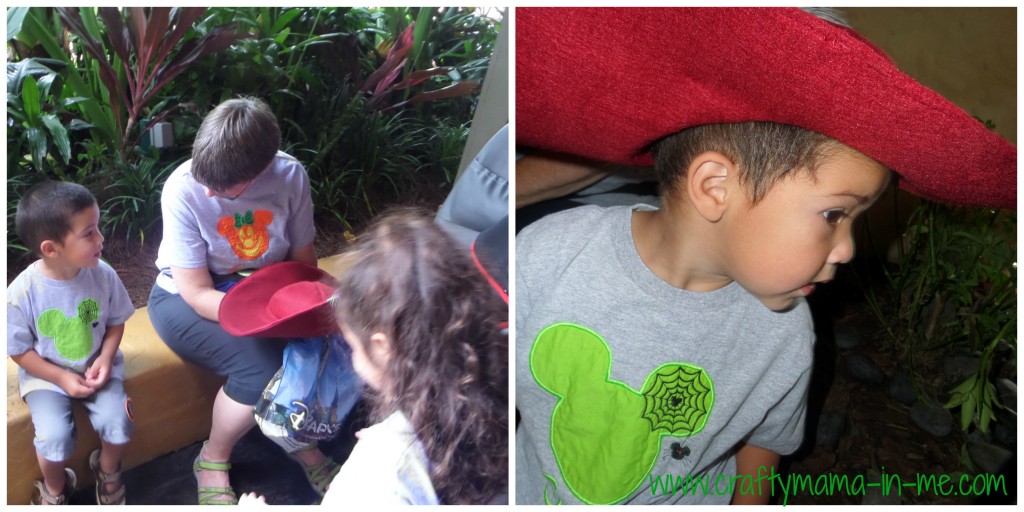 My mom had made both kids their Halloween costumes and we had brought them with us.  The cast members loved his hat and being that they were pirates they kept stealing it- this greatly entertained the kids while we waited!  The cast members were great with the kids – they stayed in character and really it was fun to see.

Upon entering the Pirate’s League Buddy had to get assigned his pirate name.  This was quite an elaborate process and he was all smiles!  He ended up being Chris Goodwater.  Going forward that was what he was referred to as by all cast members. 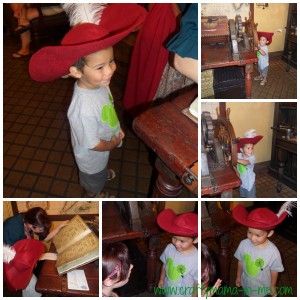 After he got his name we moved inside to wait for a “stylist” to be available.  We waited roughly another 15-20 minutes – but inside there was a lot more fun stuff to look at so the time moved quickly.

Once Chris Goodwater was called he headed to a stylist’s station and was quickly transformed into Captain Hook!  The stylist was great with him and worked quickly but didn’t seem rushed.  Buddy looked amazing when he put his costume on! 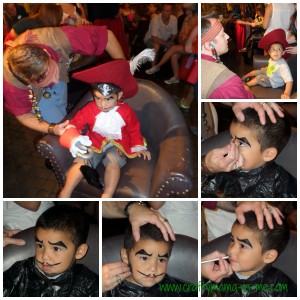 After his makeover was complete we moved back to the inside waiting area to wait for him to be inducted into the Pirate’s League.  The First Mate Package that we choose includes the following (this information is from the Disney website):

Once they called him to join the Pirate’s League he was given his sword and sheath and made promise not to use his sword to hit anyone (I thought that was a nice touch!).  Next he was led into a “hidden chamber” to have his pictures taken.  If you have purchased Memory Maker you would receive the pictures there – if not you could pay extra to purchase prints. 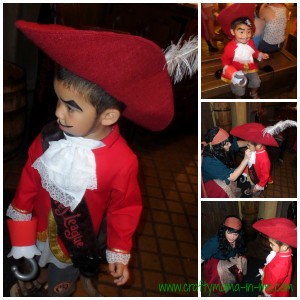 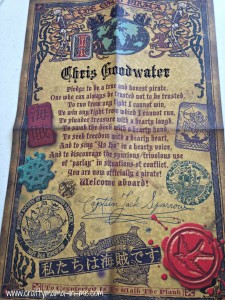 This was a highlight of the trip for Buddy as it was all about him! I’m so glad that we did it and would recommend it to anyone with a little boy (especially if you also have a daughter that you are going to take to the Bibbidi Bobbidi Boutique).  Make sure you plan around two hours for the experience and if possible I would recommend only having one parent stay and the other take the non-participating children to do something else.