So I am in full on party prep mode for our #DisneySide @Home Celebration.  I can’t wait to host our Mickey themed Valentines day party.  We have a lot of family and school friends coming and it should be a blast.  I decided to make a piñata for the party – so of course it is going to be a Mickey piñata!

I got my inspiration from pinterest as usual.  Everyday Whimsy had made a Mickey/Minnie piñata and I used their idea to make my Mickey.  I modified it to be a pull string piñata as we are inside the house and don’t have a ton of space.  I used a combination of Fancy Frugally and Young House Love posts as the inspiration for the pull string portion of the piñata.  Let’s start with a picture of the finished product today as this is going to be a long post with lots of pictures. 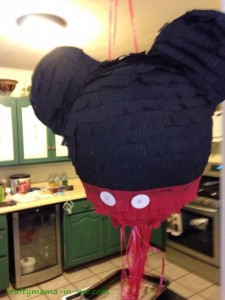 So first I took a punching balloon and blew it up: 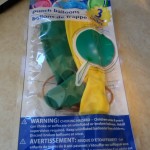 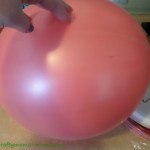 Next, I made slits in the bottom of all four dessert plates, bent the bottoms out to create a flap and taped the plates together to make the ears.  After the plates were taped together I taped them on the punching balloon.  You need to be patient during this process and be liberal with the tape (use a lot – in hindsight I would have used more as one of my ears became loose while I was applying the paper mâché) 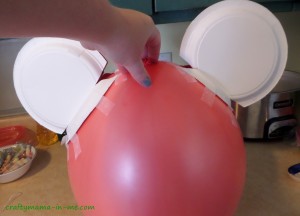 After I had the base for my structure created I made paste.  I used equal parts flour and water to start and cooked my paste to thicken it (I started with 2 cups flour and 2 cups water).  I cooked the paste stirring constantly until it started to thicken.  While the paste was cooling I ripped strips of newspaper. 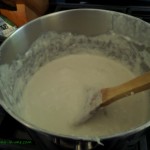 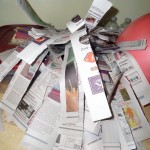 Once the paste cooled Boo Boo and I got started (Buddy was napping).  I found our paste to be too thick so I added more water to get it to a more manageable consistency – I think it probably ended up being about 3 cups of water total that I added – maybe even more.  Adding the layers of newspaper takes a good amount of time to get a thickness that will be sturdy enough to hang and hold the prizes. 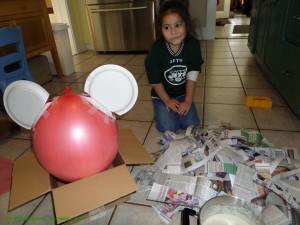 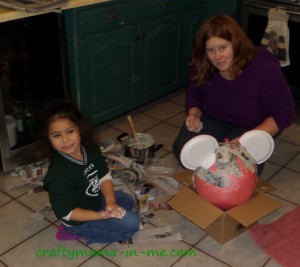 Boo Boo helped for a while and then quit and Daddy cleaned her up (notice the Jets jersey – this was Super Bowl Sunday and I had the kiddos decked out with their Daddy’s favorite team’s jerseys).  After about thirty minutes to an hour of paper mâchéing I decided that the piñata should be thick enough and took it out to our pellet stove to start drying up.  I realized quickly that was a bad decision as the heat was too hot right on top and made the balloon inside shrink.  After blowing the balloon up more to re-inflate it I popped the newspaper casing. After the paper mâché dried I decided to do a duct tape patch instead of paper mâchéing again because I didn’t want to wait for it to dry again. 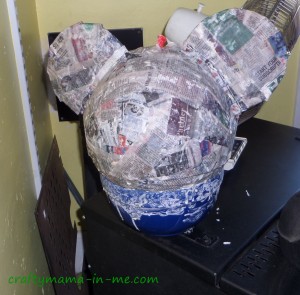 I left the piñata for three days to ensure it was fully dried before I moved onto the next step.  I had my husband help cut a flap in the bottom with a utility knife (the bottom was thick and I am a bit klutzy so I was afraid of cutting myself).  I also had him make notches in the top so I could feed a ribbon in to make a hanger.  I doubled the ribbon to make the hanger stronger, pushed the ribbon in one hole – stuck my arm in through the flap in the bottom and pushed the ribbon up through the other hole.  Once I pulled the ribbon through I tied a knot at the top and viola – I had a hanger! 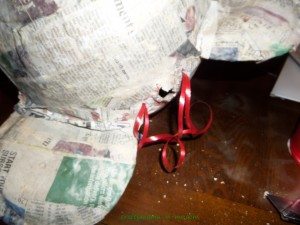 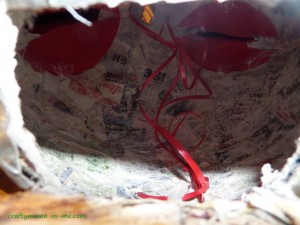 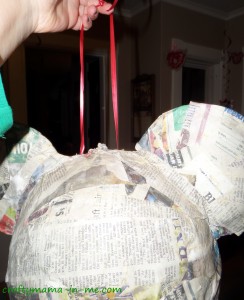 After I finished the hanger I focused on the flap and creating the pull strings.  I reinforced the flap and surrounding area with duct tape to make sure it would hold once I added the prizes.  Again I had my husband help – he created 24 slots on the flap for me to put ribbons in.  I decided on 24 as it will be 2 per each of our 12 young guests – I figured this way they would each have a shot (hopefully).  Since I had used duct tape to reinforce my flap this process proved to be a bit difficult.  After my husband made the slots I thought I would be able to easily slide the ribbons through – this wasn’t so – evidently duct tape regenerates!  I ended up using a knife to push the ribbon through and then pulling it up once I could reach it.  I made two of the strings the “winning” strings and tied them together and then duct taped them down to the inside of the flap.  The rest of the strings are just pulled up through the slot with about 3 or 4 inches of ribbon on the inside of the piñata. 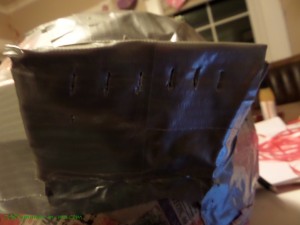 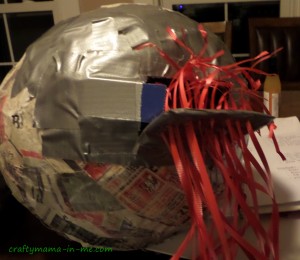 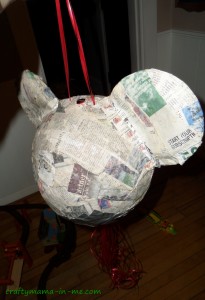 Next I gathered my prizes, these included candy, bags of mickey shaped valentines pretzels, mickey stickers, and mickey tops.  I put these inside and created tabs to hold the flap shut.  The tabs were just small pieces (1 inch wide by 3 inches long) of cardboard that I duct taped (can you tell I love duct tape??)  to the bottom of the piñata to hold the flap shut when it is hanging.  For some reason I didn’t take pictures of this but I put one tab on each side of the flap that was cut out from the main structure – I secured about two inches of the flap to the main structure and had about an inch that went over the flap to hold it shut.

After the piñata was full of prizes and secure I started to decorate.  I used streamers as I already had them on hand from previous parties and thought they would work just as well if not better than tissue paper.  I decided to use a hot glue gun as I liked the idea of almost immediate drying instead of having to wait for something like tacky glue or elmers to dry. 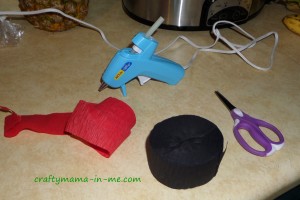 I would unwind a strip of the streamer, cut notches in in it (this gives the finished product a fringed look), apply a strip of hot glue to the piñata and attach the streamer.  This was time consuming and a bit tedious.  I also want to mention that I have a low temperature glue gun – if you don’t you would need to be really careful as the glue does seep some as you push the streamer down.  I started putting strips on the bottom as I wanted to layer to ensure that none of the newspaper showed through.  I used red on the bottom to create the illusion of mickeys shorts.  After I finished with red to the desired height I did the same thing with the black.  When I got up to the top near the ears I would cut the streamer, secure the end and then start with another streamer on the opposite side.  I did the ears last and wrapped the streamers right around just as I did with the body.  To finish the top of the ears I put a streamer over and attached on both sides. 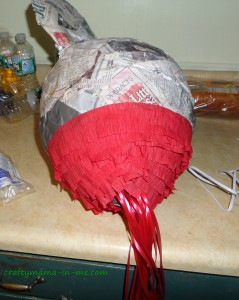 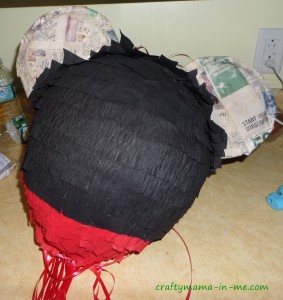 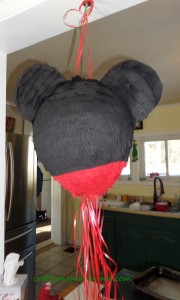 While this may not be as perfect as store bought I think it is awesome.  I spent roughly $4 out of pocket to make this as I already had the majority of the supplies I needed in my house.  Its definitely a much cheaper alternative to buying a piñata.  We are a little under a week to our #DisneySide party and I can’t wait!!