Yesterday was Tool’s 7th birthday.  We always do something to celebrate both dogs as Tool’s birthday is March 14th and Zoe’s is March 16th.  Usually we just have a people cake and pupcakes with frosty paws.  This year we went all out since we know that likely this will be Tool’s last birthday.  As I mentioned before he loves turkey (aka Oven Bird).  He enjoys the whole cooking process and usually can be found “helping” me baste the turkey.  He definitely “helps” carve the turkey and pick it after!

My parents and my husbands mom joined us to celebrate!  We had a full Thanksgiving style dinner for lunch and then cake and ice cream.  The dogs got a few presents too 🙂  Tool had an awesome time – he ate too much and played hard with his new stuffie!

Friday night I baked the “people” cake – I made it in the shape of a dog biscuit.  I found a tutorial on how to shape the cake here.  I used two cake mixes – the tutorial called for three but I really didn’t want to make that much cake as it wasn’t for a lot of people so our cake was just a bit thinner.

I used a clearance christmas cake mix for one of the boxed mixes hence the red and green round cakes.  I divided the batter between four 8 inch round pans and one 8×11 to get the shapes I would need. 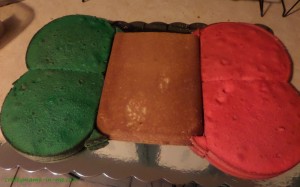 I frosted the cake with chocolate frosting and used my leftover green mint frosting from the shamrock shake cake for decorating. 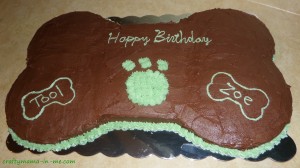 I had previously made the homemade dog ice cream – check that out here. 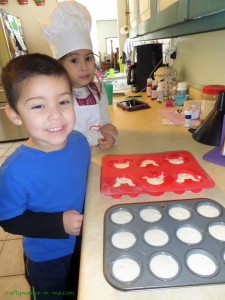 The morning of the party I made the dogs pupcakes.  I looked at all kinds of recipes and really didn’t find anything that I thought was just right.  I thought about what our dogs liked and realized that I should just make pancake pupcakes as they both love pancakes so much!  So I whipped up some pancake mix, added a mashed banana, sprayed a muffin tin with cooking spray and baked the pupcakes.  After they cooled I frosted them with peanut butter and added a dog treat for decoration.  It couldn’t get easier and also in their opinions better! 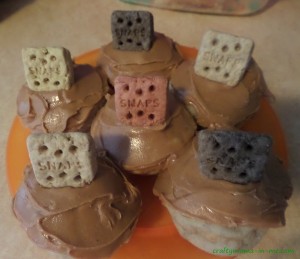 When the turkey was finally done and had cooled for a bit – Tool “helped” my husband as he carved it! 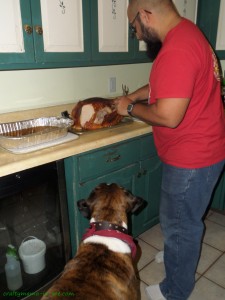 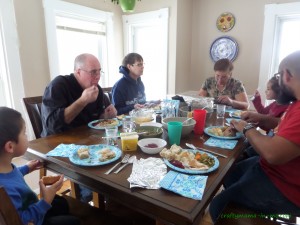 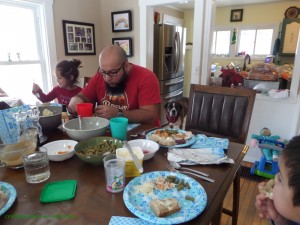 After we finished eating and clearing the table – Buddy insisted it was time for a treat!  So I brought out the cake and then we sang happy birthday to the dogs and they got their treats!

After everyone’s bellies were full – my dad helped me pick the turkey off the bones.  Of course we had an amazing helper! 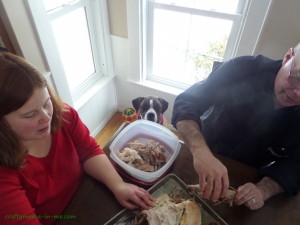 My mom had brought the dogs a birthday present so they opened those.  Tool had a blast making the toy squeek!  Zoe wasn’t sure of what to do with the new toy but enjoyed it once she was sure Tool wasn’t going to grump at her. 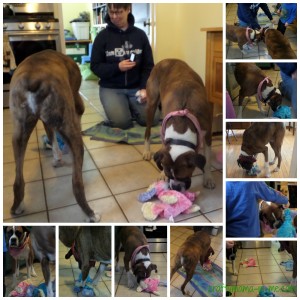 We had a great time at our puppy party!  Tool enjoyed himself and was in heaven with all of the great smells and food that he indulged in (I was bit worried he had too much but he didn’t get sick so I guess it was ok!). 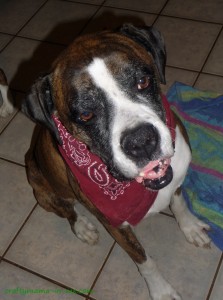 We had a family birthday party to go to at dinnertime so Marlon’s mom came down and feed the dogs dinner.  When we got home I finally convinced Tool that he should try snuggling with me on the couch!  We were both really happy – it was the perfect end to a pretty perfect day! 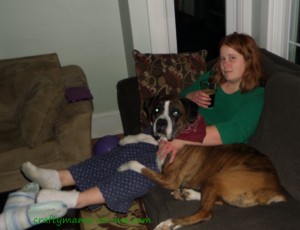 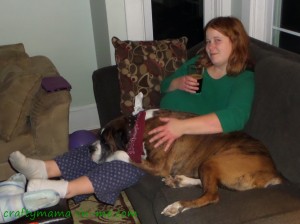