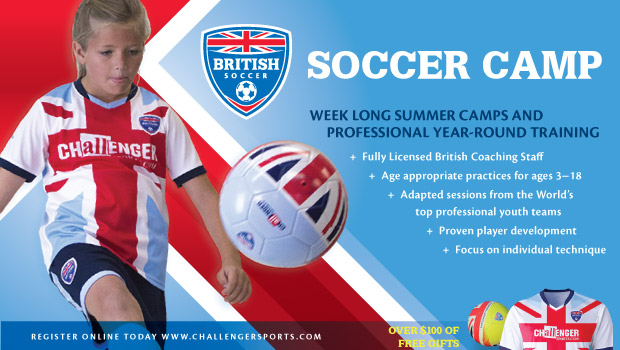 Have you ever thought about enrolling your child in a soccer camp?  My daughter recently completed her first week of soccer camp during one of the hottest weeks of August!  She was a trooper and really had a blast with the other kids and the coaches during her time.  Read on for more of my review of Challenger Sports – British Soccer Camps.

Boo Boo is 6 and struggles with her confidence so I worried about soccer camp (especially since I signed her up for the session that had kids ranging in age from 6 to 12).  I spoke with her coach prior to dropping her off about the fact that she may cry and he assured me that they would be able to handle it and that she wouldn’t be the only one.

The first day I stuck around a bit to make sure she would be ok but I think that made it worse so I headed off to the car where I could spy without being seen (the life of a parent right??).  From what I could see she was out on the field running along with the others and when she needed help the coaches were always willing.  The next few days her confidence and skill level increased and I decided I would head down to the field to see the games.

I am thrilled with the total experience – Boo Boo’s confidence and skills soared over the week.  While she still wasn’t the most aggressive on the field the improvements in her game definitely were very noticeable.  Since soccer camp finished Boo Boo has been playing soccer every day in the yard and I think we will see a remarkable improvement in her playing in the upcoming recreation department season.

British Soccer Camp is the most popular camp in North America – 150,000 campers! With an innovative curriculum that develops skills, speed and confidence in players ages 3-18, British Soccer Camps provide boys and girls with the rare opportunity to receive high-level soccer coaching from a team of international expert’s right in the heart of their own community.

In addition to teaching new skills and improving game performance, each British Soccer Camp provides lessons in character development, cultural education and is the most fun your child can have learning the sport they love!

***Disclosure:  I received a free week of Soccer Camp for my daughter thanks to the USFamilyGuide.  No other compensation was received and all opinions are my own.***