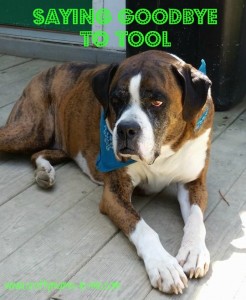 A week ago today was one of the hardest days I have ever faced.  We had to get Tool put to sleep.  Less than two weeks prior to that day the steriods seemed to stop helping with the frequent urination.  As the vet said when the steriod stops working things will go downhill fast.  I never realized what she meant.  He stopped wanting to eat breakfast, started having trouble breathing, developed even more bumps and lumps, and started shaking almost constantly.  The decline was so rapid it was scary – two days prior to getting him put to sleep we made the appointment as we didn’t want to continue to see him suffer.

Roughly a week and half to two weeks prior to the end – we noticed that Tool had increased his water consumption and was going out much more frequently.  We also noticed his bumps getting bigger and that he seemed to have a hard time catching his breath.  We assumed that time was getting short and decided to celebrate Tool!

We spoiled him more than I think I have ever seen a dog get spoiled.  He started his day by not wanting to eat, this lead us to coaxing him into eating with people food.  My mother in law would show up and give him around four slices of bread.  Then he would just look at me and I would give him either a treat or a piece of hot dog.  At lunch he got pretty much all of the kids leftovers plus whatever else hubby decided to feed him.  He had snacks in between lunch and dinner too I’m sure – all depending on the day.  At dinner he would get his dog food plus the kids leftovers.  Every night after the kids went to bed he would get a hot dog.  The two days before he didn’t eat a single bite of dog food – only people food – it was only fitting that I pulled out a turkey pot pie from the freezer with his birthday turkey in it for his last meals.

The Sunday prior we went to my family’s camp.  We left Zoe at home so Tool and my parents dog Remy could have the run of the place.  Tool had a blast!  We cooked hamburgers for lunch – he had his own plus whatever else people snuck to him from the table (which was a lot).  He drank to his hearts content straight from the pond and enjoyed a nice leash free walk.  He might have slept 20 minutes the whole time we were there but he just looked soooo happy. 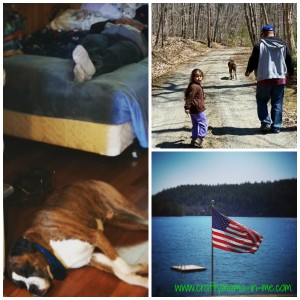 Monday I drove Boo Boo into school with her teacher appreciation gifts and took Buddy and Tool along.  Tool enjoyed the ride and was so happy to be out with us.

Thursday evening it was really warm so we went for a ride with the windows down to a local playground.  Tool watched the kids play and enjoyed the ride – he always loved going in the car!

Friday we left about an hour and a half prior to our vet appointment – we folded the back seat down so Tool could stand and put his head out the window.  We went for a long ride on small roads, stopped once for a water and pee break and then continued on to the McDonald’s drive thru to get Tool a cheeseburger. 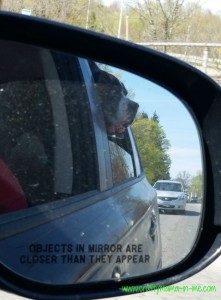 The vet appointment was one of the hardest things I’ve gone through in my life.  I am not going to go into detail but honestly leaving my puppy there and walking away was horrific.  The sadness was almost overpowering.  We know in our hearts that it was the right thing to do as he was suffering but it did not make it easier.  Tool was our first baby and our life will always seem a little bit empty without him in it.

The kids were resilient.  We had quite a few tears last Friday when we told them it was Tool’s last day, when they had to tell him goodbye, and again at bedtime.  I think one thing that helped tremendously was that both kids already had a stuffed boxer toy, they both named it Toolie and sleep with it.  Boo Boo has even displaced her beloved Pooh stuffed animal in favor of her Toolie right now.  Daily she brings him down to get kisses and snuggles from his momma.  I think this has given them something to hold on to physically and allow them to remember him.

I think the hardest thing that I’m dealing with is the silence.  Zoe is a very quiet dog – I think I’ve heard her bark maybe five times since last Friday.  Tool barked at everything, the mailman, the UPS truck (that was his mortal enemy), anyone that walked by, cars that sounded funny – you name it.  He was a constant shadow and heaven forbid I prep a meal without his head in between me and the counter.  In the end I rarely yelled at him – I knew that someday I would miss all those things that drove me nuts.

I feel a sense of relief in knowing that he is not suffering anymore – it was so hard to watch him in the end – but I also feel guilty that I am relieved.  Grief makes you think crazy things huh?

We have fabulous memories of Tool that we share almost daily.  We have one awesome memory hanging on the wall – a family portrait including the dogs that we had done this past fall.  Many thanks to our neighbor Todd Douglass from Douglass Photography for the beautiful image you see below.  It hangs in our living room and I know that I look at it daily.  I am so thankful that we decided to do the picture with the dogs this year. 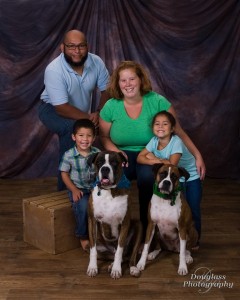 I would do just about anything to have him begging right next to the table or barking like crazy at us when we pulled into the driveway.  Tool was not just a pet, he was a member of our family.  I will miss him everyday.  I know that it will get easier, and honestly it has somewhat already.

Cancer sucks – it took our boy from us way to early – he was only seven.  I know that he is loving every minute in doggy heaven – I can only hope that someday I will be lucky enough to see him again. 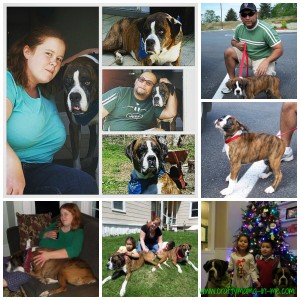