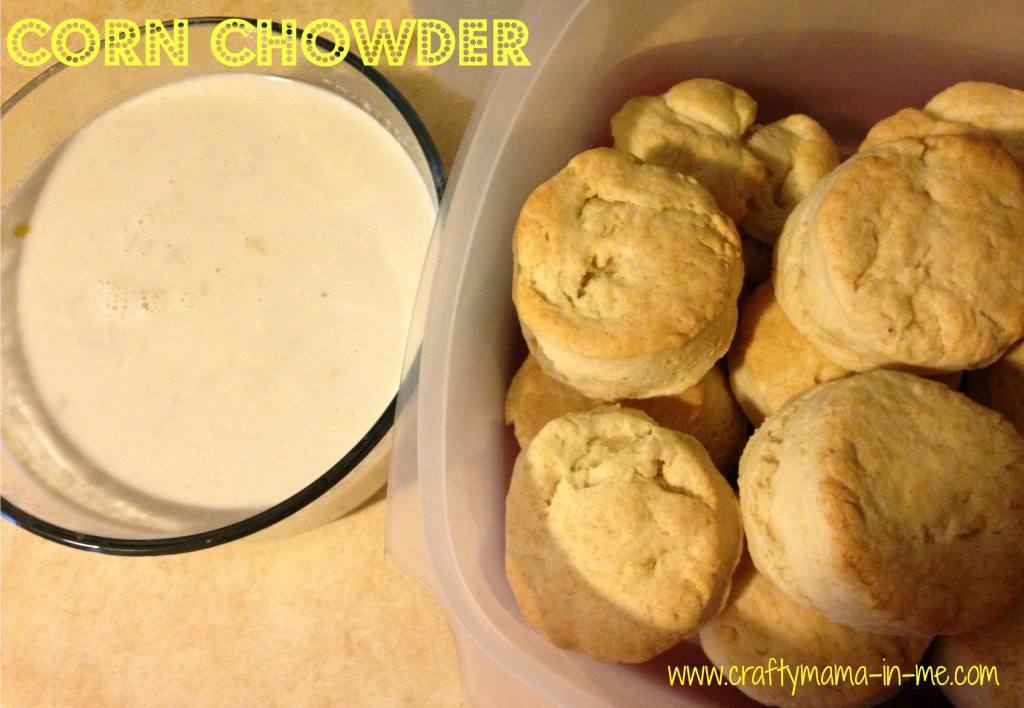 It’s finally Friday!!!  Today is the last weekday during school vacation and it started out rainy again.  The kids and I had to run out to buy a few groceries and I found inspiration for dinner at the Save-a-lot.  We were picking up a gallon of skim milk and I saw how cheap the half and half was which lead me to think that I should make corn chowder.

Since it is a somewhat dreary day I can’t think of a better meal to warm our bellies than corn chowder with homemade biscuits.

I slice the onion into small pieces and place it in the pot.  Next I peel the potato and cut it into small pieces (roughly 1/2 cubes).  For some reason my kids don’t like potatoes so I find that if I make the pieces smaller they are less likely to realize what they are eating!  Once both the onion and potato are in the pot, add water until barely covered.  Bring to a boil, then reduce heat and simmer until the potatoes are cooked.  Add the bag of frozen corn and pint of half and half and heat for an additional 10-15 minutes.

This is a cheap dinner to make – the ingredients cost roughly $2.75 and this pot makes around 10 – 1 cup servings.  That makes it less than 28¢ per serving – you can’t beat that!  When I make corn chowder I serve it with homemade biscuits.  You can find the recipe in my previous post about Shamrock Biscuits.

Tomorrow morning Hubby and I are going to do some building with the kiddos.  Hubby bought the kids little hammers and school bus kits from Lowe’s a few weeks ago and we hadn’t had a chance to make them yet.  You can find kits on the Lowe’s website here.

In the afternoon we are going to my nieces 7th birthday party and Boo Boo is going to have her first sleepover at my nieces house.  This is her first sleepover that isn’t at Gramie’s house.  I’m nervous!!  I’m sure she is going to have a blast but I just worry that she will be scared in the night.  My mom (aka Gramie) lives just up the street and said she would go get Boo Boo and bring her back to her house if necessary.  Wish me luck that I won’t stress too much!  How old were your kids when they had their first sleepover somewhere other than the grandparents house?