My second trip to Disney was in November 1997.  10 years after the first – my brother and I were in high school and it wasn’t his idea of a fun time – to me it was still amazing – I guess this should have been a sign of how much I would continue to love Disney as I got older.

We went to Florida for two weeks, we stayed one week near Daytona and the other at the Vistana Resort.  The Vistana quickly became a family favorite that my parents continue to visit whenever they can get in with their time share points.  This is humorous to me as it is on the property directly adjoining Vista Way the apartment complex that I lived in when I worked for the Disney College Program.

This vacation we had five day hopper passes and my mom had these still so check them out below. 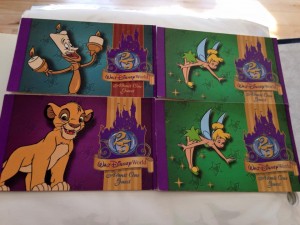 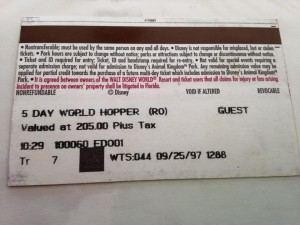 I certainly can’t believe the price – it was $205 per person including water parks and no expiration – my parents used left over dates from them when they came to visit me in 2002.  The price now for a five day hopper pass is $405 and the tickets expire 14 days after the first use.

Unfortunately as we went in the 25th Anniversary and the castle was in its ugly pink birthday cake wrapper.  Other than that it was just as magical.  This trip I got to meet my favorite character – Eeyore! 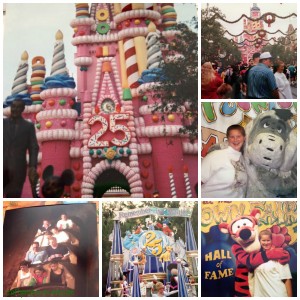 We went to both Epcot and MGM Studios (now Hollywood Studios).  I included pictures of the sign out front, the now extinct Backlot Tour, the Hercules parade and of course the Tower of Terror picture that we purchased (note I didn’t make that large as we all look petrified!!). 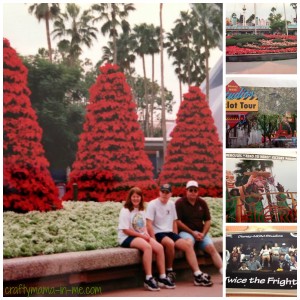 We loved doing water parks – this is still one of my dads favorite things to do at Disney World.  We went to Blizzard Beach which was the newest water park (it opened in 1995) and River Country (the oldest and now extinct).  We had a blast at both!  We also took the boat over to Discovery Island (also now extinct) – it really was a cool island. 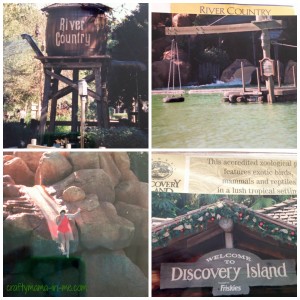 Our second trip was a lot of fun and made me realize that I loved Disney World and would be spending a lot more time there.  This is my favorite family vacation we ever took!  Next week I will show some pictures from my senior class trip (hint – we went to Disney World!).

Here’s the link to my #DisneySide giveaway as well – feel free to enter – winner will be announced 3/5/15.